Pridnestrovie (Transnistria) – A Country that’s not a country 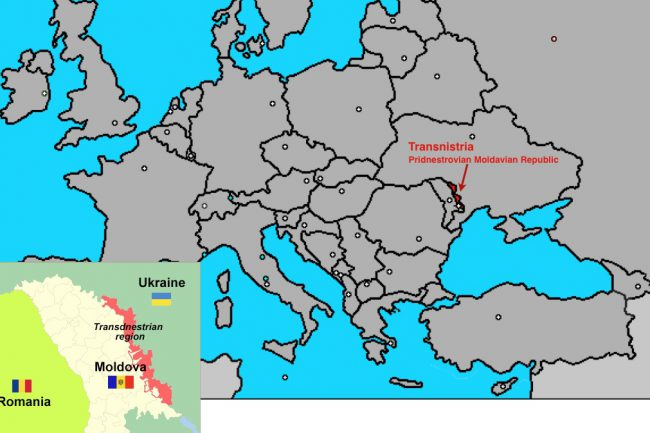 “Welcome to the Transnistrian Moldavian Republic!” is an inscription that will welcome you at the crossing of the border with Moldova into this country as a similar

inscription would welcome you elsewhere. But what will really surprise you is that you are in a country unrecognized by any other country or international organization in the world. Surely everyone has heard of Moldova, butmany probably do not know that another "state" has nestled on the border between Moldova and Ukraine.

The beginning of the ‘90s was an extremely turbulent period not only for the Balkans. The changes are happening as well in the second bloc in Eastern Europe - in the USSR. After the collapse of the USSR, many states gained independence and considering the vast territory on which the USSR spread, we can assume that drawing new borders was a turbulent process. Such a case happened in Moldova, where another parastate called Pridnestrovie or Transnistria was created on the border between that country and Ukraine. What is it all about?

Transnistria is an area between Moldova and Ukraine, on the left bank of the Dniester, which declared its independence unilaterally on September 2, 1990, and on which territory about 500,000 inhabitants live. In the period from 1991 to 1992, a short war broke out between the Moldovan and Transnistrian armed forces due to the unilateral declaration of independence. Although officially part of Moldova, Transnistria has all the characteristics of an independent state. The capital is Tiraspol with about 159,000 inhabitants, where the seat of the government (parliamentary republic) is located, which is accused of corruption and numerous criminal acts in this area, such as trading weapons, alcohol, gasoline, etc. Transnistria has its own currency (the Transnistrian ruble), a flag (the only one having symbols of sickle and hammer), the judiciary, the police, as well as an army that ensures the inviolability of the territory. Chisinau, as the capital of Moldova, and in fact, of Transnistria has absolutely no influence on the government in Tiraspol. The official languages are Russian, Moldavian, and Ukrainian.

The Council of Europe describes this area as an "area of frozen conflict". The President of Transnistria, Yevgeny Shevchuk, has repeatedly called on Moldova to finally recognize the independence of this pro-Russian region, which seceded back in 1990. As many as 97% of the citizens of the region have expressed an open will for Russia, which is financially helping the region, to carry out the annexation. Russia and Ukraine wanted to resolve this issue for a while but then they became aware that it would provoke a chain reaction in other geopolitical hotspots, so they withdrew and consider themselves responsible for achieving peace in this area.

To reach Tiraspol, it is necessary to cross the border between Moldova and Transnistria, where everything goes according to the established procedure to which we are accustomed at all borders. You need to show your travel documents, and once you get a pass, you need to keep it for the entire duration of your stay in this state. Although you will be greeted in Tiraspol by typical socialist architecture - dilapidated, large blocks of deteriorated facades, it does not mean that things have not changed in recent years.

Given that Moldova is considered one of the poorest countries in Europe, the same goes for the area of Transnistria. There is a huge difference in prices compared to some other Western European country. Prices are extremely low, as well as salaries, which tells us that life in Transnistria is not so pleasant because a lot of young people go to Romania, Ukraine, or Russia to earn something more. In support of this speaks the fact that GDP per capita is only about $ 2,000. The inability of the Moldovan government to influence the situation in Transnistria in any way is reflected in the incident from 2004 when all schools in which the Moldovan language was written in the Latin alphabet were closed. This area, ideal for polyglots who speak Moldovan, Ukrainian or Russian language, is interesting because if you write the Romanian in Cyrillic, then it is called Moldovan. Written in the Latin alphabet, it is called Romanian. Therefore, schools in which you can study the Romanian nowadays have the status of private schools and therefore do not receive any funding from the Government in Tiraspol. For anyone who wants to see how life used to be in the USSR and go back a few decades, Transnistria is a perfect choice. Buildings built during the Soviet era, various statues of Lenin and other communist leaders still stand as silent witnesses of a former epoch.