Thinking about how to write an overture about Počitelj, I realized that it is best to start from myself, from what this ancient city means to me and how much my heart belongs to it. Počitelj keeps a piece of my carefree childhood, my first picking of figs and pomegranates and a brave swim in the ice queen Neretva. When I think of Počitelj, that childish laughter and the rush on the cobblestones still echo in my mind. Nowadays, at the lower gate we can hear the murmur of adults who are always competing in who will be the first to sell the most beautiful souvenirs and the most delicious Herzegovinian fruits and juices.

Everything remains the same in Počitelj today, except for the children's yells and rush that can no longer be heard. The city has a modest number of 18 residents who live exclusively from tourism. When you enter Počitelj, the locals will shower you with kindness and smiles and offer you homemade products and souvenirs that you can buy at a very low price. Buy a few small things from them, you will do so much for those people, because it really is hard work; selling products in the stone and thorn at almost 40 degrees when it is summer, not to mention how hard it is to maintain the fruit, pick it and everything else that goes with its cultivation.

After refreshing yourself with local fruit and juice, you will step into a real journey to the Museum of Cultural Heritage because Počitelj is indeed the primordial historical treasure of our country. I doubt anyone remained indifferent to its beauty and uniqueness. Near the entrance, the view will stop at a clock tower from the 17th century, although some sources say that it was built even earlier. It is about 16 meters high, with each side of the tower being decorated with unusual windows. Its main purpose was to serve as a hiding place for the guards who protected the town from the enemy. The clock tower is all made of stone, as are all the buildings in Počitelj. After the clock tower, you can't miss the complex of the Shishman Ibrahim Pasha Mosque (formerly known as the Haji Ali Mosque) whose beauty is breathtaking. It was also built during the reign of the Ottoman Empire in Počitelj in the 15th century.

We continue our journey along the cobblestone stairway, where we soon encounter the world-famous art colony in which the International Art Exhibition takes place every year. The next building that all tourists eagerly await to visit is the Gavran-Kapetan’s Tower, which has been faithfully watching over the city for centuries and with great effort resists the ravages of time. The tower was divided into several rooms that housed soldiers, a gunpowder store and a dungeon.

It is important to note that the entire Počitelj was a fortress that protected the town from potential enemies. If you look closely at the old surrounding walls, you will notice "holes" that were actually loopholes, and the slightly larger openings at the very top of the walls were intended for the guards to sprinkle hot oil through if the enemy approached the walls.

Above the tower is a large round water reservoir which is popularly called londža. This is the place where, I guess, tourists take most of the photos, because the view from londža is amazing. From this place you can see the entire Počitelj and the coast of the Neretva, along which stretches the beautiful Polje enriched with greenery, and some cottages.

Very often tourists in Počitelj ask me if there is a place nearby where they can refresh and bathe. Then I direct them to the Počitelj Polje, where the Barakovica bathing spot is located. You can always ask the locals how exactly to get to Polje, but it is important to know that it is really close and that you only need a 15-minute walk to the beach. The road to Polje is opposite the old town when you cross the main road. The Neretva is exceptionally clean there, the landscape is magical, and all you can hear is the sound of birds and crickets. I remember Barakovica for the most beautiful memories and children's adventures because I swam there for the first time and spent time with my father, who often fished there.

If you are not ready for the Neretva, which is still much colder than other rivers, you can head to the famous bathing spot Jaz on the Trebižat, which is located near Čapljina. You can get there by car again in a few minutes.

You don’t have to worry about food and coffee. Počitelj has two or three fine restaurants where you can eat at a very reasonable price.

However, as nothing in this world is perfect, so it is not either here. In my humble opinion, the entrance to Počitelj should be charged as it is done in many other cities of our country in order to invest a little more in its preservation. Some edifices are gradually, almost imperceptibly, but certainly collapsing. Through conversation with the locals, I learned that the municipality is working very little on it and that Počitelj has unfortunately been left to itself for years. It is up to us to work at least on raising awareness of such troubles in the cities. As far as I am concerned, I hope that I managed to do so at least in part by writing this text. I hope that you liked this literary "tour" through the ancient town of Počitelj and that I managed to show you at least half of what awaits you there. Počitelj is a unique national monument not only of Bosnia and Herzegovina but also of the world. I doubt anyone remained indifferent to its beauty and uniqueness.

You can find our author on Instagram profile: kikyo.e 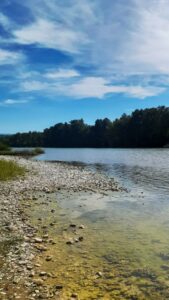 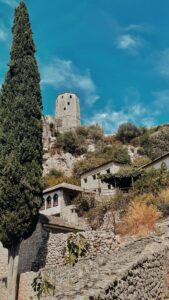