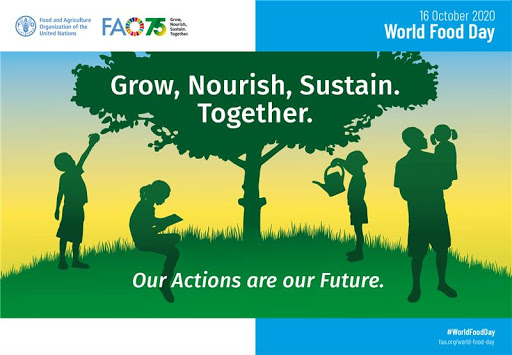 In 1979, at the World Food Organization (Food and Agriculture Organization) conference, October 16 was declared World Food Day. Every year, this date aims to show the importance of a healthy diet, the food reliability, to remind us how important food is in terms of quality and safety in general and to point out the problems we face regarding food, such as obesity and empty calorie intake, lack of food in certain areas, death caused by starvation, etc.

This year's World Food Day is marked under the slogan "Grow, Nourish, Sustain. Together.” The slogan is made according to the revolutionary changes promised to small farmers through the application of newer, more modern technologies, which include satellite imagery, remote reading, development of mobile applications with the ability to improve the food chain, then increase access to nutritious food while reducing food wastage and waste, to provide farmers with assistance and additional funds in case of disasters, etc.

Certainly, the problem should be approached constructively and intensive training of the population on food, its production, production methods should be started, as well as incentives for food production should be provided. Despite the fact that a huge amount of food is produced in the world today, there is still a large number of those who do not have regular access to that food, more precisely two billion people.

Regarding Bosnia and Herzegovina, although we have good agro-ecological conditions for food production, there is still an extremely high percentage of imports and as much as 30 per cent of uncultivated land. Thus, for example, large quantities of honey were imported, which did not even meet the requirements prescribed in terms of quality. The problem with import is certainly the tendency of the supplier to make additional profit through fraud, ie. deception of the end consumer - the buyer. Fortunately, there are services that monitor the situation on the ground and take certain measures to put an end to customer fraud.

This year, the COVID-19 pandemic turned us to our homeland not only in terms of tourism but also in terms of purchasing domestic products. In mid-March, when we were in a collective lockdown, the population panicked, so to speak, for fear that we would not have enough food. However, considering that we have a large area of arable land, that we have the same conditions for food production as some other European countries, it quickly became clear that our tradesmen and producers are ready to tackle the problem, saying that there is no need to worry because there are food and other necessities in quite sufficient quantities.

The aim of every international day is to point out the problem in society and raise awareness towards its solution, so this problem can reduce its scope by 2030, all within the framework of the Sustainability plan.